Courses My Library About Us Podcast Blog Login

Andrew Yang: MATH, Mindset and a Movement of Radical Change 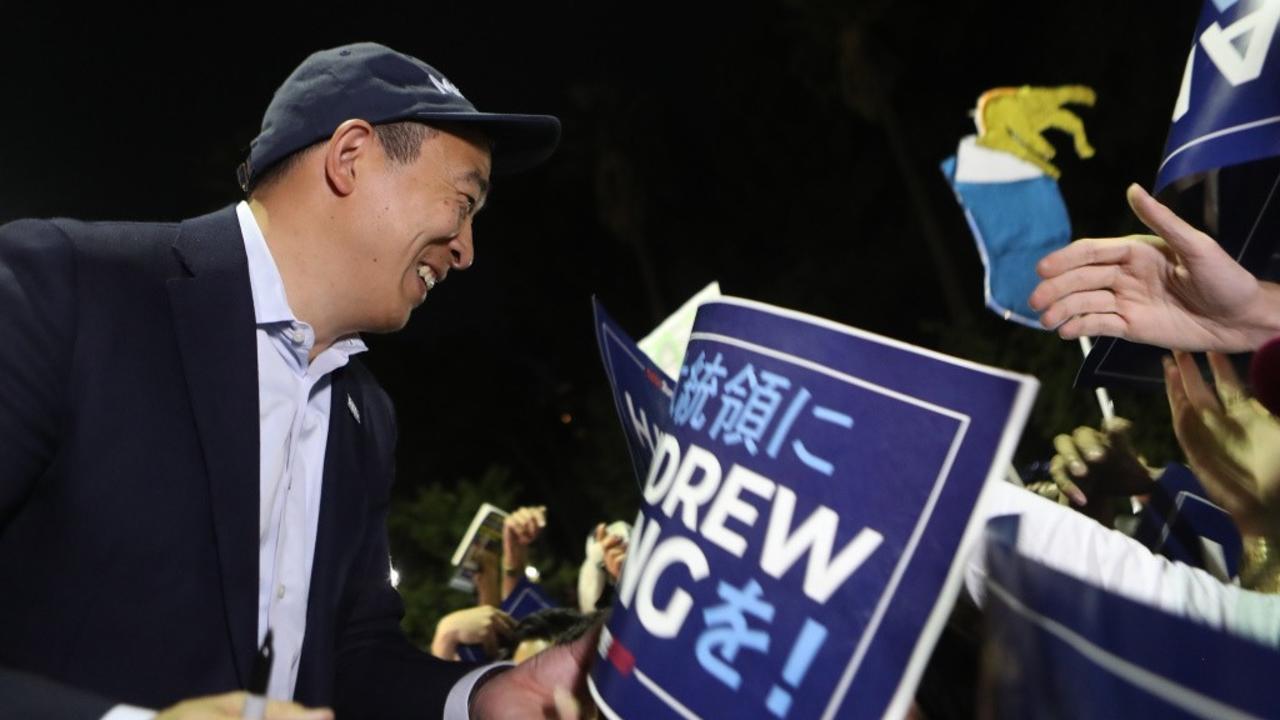 MacArthur Park, a place I once knew as gangster’s paradise in the ‘90s, is transformed with a sea of blue MATH signs, hand painted Andrew Yang art (even graffiti art), with MC Jin’s Yang-inspired anthem pumping up the crowd to spread his message that has been catching fire all year.

I’m not surprised that a REAL entrepreneur could grow rapidly, entrepreneurs know how to market, brand themselves, problem solve and get people on board with their vision.

Watching his campaign grow is my nightly obsession, instead of binge watching a Netflix series I am searching Paget Kagy or Problem Solver Politics YouTube videos before bed, wondering what the next hashtag or call-to-action will be for the Yang Gang.

As a single mom, writer, entrepreneur, podcast host, and a voice for women, I have to share why his policies and leadership is important now more than ever:

Welfare is an AWFUL System

I applied for food stamps SEVEN times before I was approved back in 2005. Each time I applied, there was some small, stupid technicality that kept me from receiving benefits: small shares of Disney stock I got as a gift or even having $100 in a savings account. I withdrew the little assets I had and kept applying in the hopes that I could continue getting childcare subsidies and health care. At that point, food stamps and cash aid weren’t even a concern yet.

I wanted to keep my benefits so badly that I made poor choices; I turned down full time jobs with better opportunities and took temporary jobs that were exploitive because they paid cash under the table, all to keep my health care and $463 of food stamps each month. I tolerated sexual harassment, bullying and even being short changed on payday and felt like I forfeited any worker’s rights. I never learned to build assets since I couldn’t have any, and never saved money for the rainy days of single motherhood. And when receiving cash aid, single moms give up their child support. DPSS reaches out to the missing father and makes them pay more and reimburse the state for supporting the family that they haven’t cared for.

I spent years on these programs, and before you think to yourself that I’m an entitled welfare queen who spent the cash on getting my nails and hair done (I didn’t), I want to debunk this myth. The welfare office isn’t full of moms and kids, or even immigrants. The majority of people that I met in the welfare office from 2005-2011 are men who are receiving General Relief, meaning they are ex-felons unable to find work and receiving benefits because being incarcerated will cost the state more than the small amount of food stamps they get.

And ex-felons aren’t the only ones, I spoke to other homeless men who are displaced because of seasonal work; fishermen, oil rig workers, race track workers, and even injured workers who haven’t qualified for disability.

But no one has considered helping families, helping the homeless or helping women out of exploitative jobs, except Yang, through his policies and his hard truths about the future of work and automation.

As a single mom paying for two young adults in college, I have never been more thankful for a poor credit score. If I had impeccable credit, then I would have $22k in additional debt in parent loans for just this year alone, on top of the $10k debt EACH of my kids took out for their loans for just this year. I am happy to see that I’m denied for Sallie Mae’s Parent PLUS loans, because I know that I was approved, I would have been buried in debt until retirement with the never ending interest.

Every year, there is less money for college, less grants, less scholarships and the colleges know this. Colleges make offers that sound reasonable, but hidden fees and costs pop up, and after you’ve signed away your savings and withdrawn assets, there are more fees to pay that only get higher each semester.

While Yang’s Student Loan forgiveness plan would lift the burden off my kids and me, the thought of more families being bullied and swindled by colleges for an education that has not improved or grown the necessary skills needed in team building, leadership and grit is not my idea of leaving a better life for my kids.

Yang is destigmatizing education, college isn’t the only path and we can’t look down on trade schools. My older daughter is in a trade school for music production, hopefully she can work in studios when she finishes her degree. When I told my friends that my daughter wasn’t going to a traditional university but instead a trade school, there was a stigma there, but I knew she would have a better chance at finding career opportunities (and she LOVES her school). Is a trade school training for electricians, plumbers and carpenters as important as sociology and philosophy professors? If we’re going to fix our infrastructure, we have to put resources into training electricians, plummers and other workers into these trades.

Do you think you can save enough? One year of college is $62k for my son, who is at a traditional university. For all 4 years I can expect to pay $250k. Even with the best investments and savings plan, will you have that much when your kids are 18 for EACH of them? It’s not possible for families living paycheck to paycheck, and with financial aid and grants shrinking, families will spend their retirement slowly paying off loans, then leaving the burden of taking care of themselves onto their kids in later years.

I want my kids to have their own families without having to worry about me. I always wanted to be able to give them the help I didn’t have when I was alone, standing in lines at food banks and clothing drives.

During the Recession in 2008-2010, I had to go to food banks for groceries. My food stamps were on hiatus because I was over the income threshold of my quarterly reporting, and I was stuck without food.

As the struggling population grew, I found myself fighting for a pack of half molded strawberries, stale bread that was expired from the store, and bananas so rotten that they turned to mush in your hands, but there were people fighting over the rotting food like Black Friday sales.

The kids and I needed to stay at homeless shelters after we lost our home, and there were no open beds, no resources, and shelters were so full that getting one bed was lucky, let alone three.

When survival is at stake, there is a dark side that we must face if we are going to make it through or be left behind. I made poor choices, fell for scams, and spent many nights going hungry because of what little we had. I was fortunate enough to have kind yet high performing people in my life to remind me how I MUST keep my mind strong through tough times, stay focused until I could restabilize my life with the kids.

But now with less jobs available and more families starving, the dark choices that result in theft, scams or violence will increase if there isn’t something to help the people willing to steal bread to feed their starving families.

The hard truth is we didn’t prepare for the automation wave and left people out of work to go hungry. Speaking from the days where I had to skip meals so my kids could eat, the headaches and the dizziness that comes from being hungry, and even not knowing where we would sleep at night, at some point you want any relief in any form. Yang seems to be the first candidate who wants to directly subsidize people to keep them from starving, preventing the dark choices from even crossing our minds and instead filling the space with creativity, ideas and growth.

I respect Bernie for trying to tax big corporations and hold Wall Street accountable, but I respect Andrew Yang for his willingness to negotiate with them to find the win-win (another quality of a true entrepreneur).

Big corporations aren’t going to be regulated by the government, that will not be the fall of the hierarchy and enslavement of corporations among the American people. Small businesses will defeat corporations.

With the Freedom Dividend, more people will be able to build businesses, take risks and purchase goods from main street mom and pop stores, farmers markets and local artists. Imagine if you went out to dinner at a local cafe instead of a chain restaurant, or purchased the artwork from a local gallery instead of decor from TJ Maxx or Home Goods, how different would communities be? How happy would that up and coming artist be? How much better would that hole in the wall restaurant with home cooked food be?

Good people often know more good people. And good people want to build strong teams and work with more good people. When there are more small businesses, especially in smaller communities, a negative, narcissistic and rude person will not have a thriving business. No one will do business with you, work for you or be a customer. The entrepreneur knows that business is about relationships, and if you can’t spend the time being positive and serve people in the best possible way, then you won’t have a business and you will be beat by the competitor who has a smile and says thank you.

When I work with my students, I see the moment that they become FREE. We’re trapped by traumas, our circumstances, our environments, but the moment one of my students finally unlock their minds and sees the potential in their business, podcast or story, their minds open up and shift in a way that transforms them and the people around them, causing a ripple effect of positivity.

Yang brings that transformation to people, it’s in his words:

We need to go from a mindset of scarcity to abundance

When I am President…

Once I’m in the White House

When I beat Trump

His words carry weight when he speaks as if he’s already won. For some it may seem arrogant, but he’s speaking it into existence. He’s not only visualized it for himself, but other people see him as President and visualize their lives with the Freedom Dividend, happier families and communities. This technique is something I’ve noticed entrepreneurs and many successful people do. They have an unshakeable belief and when they speak their vision, make it clear and can get people to join their mission, they can lead people to freedom and like Paget Kagy said, “create a movement”.

When I learned how to shift my mind to be open to possibilities, to put people first, my life changed and now I help others change their lives. Being able to do this for the past two years has resulted in some of the most rewarding work I’ve ever done.

If Yang could get even a small fraction of their country to shift their mindset, we would see transformation in the best possible sense, more prosperity, more kindness to others, more humanity (this already happened with the 10k people in downtown LA). When he says “Humanity First”, I’m not thinking of $1k a month or Human centered capitalism, I’m envisioning us finding freedom in our minds, using our creativity and our values in ways that bring positivity and growth to the people around us, and ultimately the freedom to live our happiest, most fulfilling lives on our terms.

Free Resource Video Library for Writers looking to improve their media skills, get booked on podcasts and more!